* Impact factor according to the SCIENCE INDEX 2017

Aim: to compare the outcomes of perforated duodenal ulcer surgery by suture closure or ulcer excision.

Results: the duration of perforated ulcer surgery by suture closure was less, on average, by 9.5 min (р<0.05). No complications were reported in both groups. After 1 year, ulcer recurrence was identified by esophagogastroduodenoscopy in 1 patient of the study group (4.5%) and 8 patients of the comparison group (42.1%) (χ2=7.790, p=0.006). No significant differences in the length of hospital stay and early postoperative complications were revealed between the groups. 1-year patient satisfaction with surgical outcomes was higher after ulcer incision than after ulcer perforation suture closure as demonstrated by mean scores of all 36 items of the Short Form Health Survey (SF-36) (р<0.05).

Conclusion: incision of perforated ulcer of the anterior wall of duodenal cap is more reasonable as compared with its suture closure as demonstrated by 9-fold decrease in ulcer recurrence in 1 year after the surgery.

What is the management for a perforated duodenal ulcer? The answer seems to be clear. Global published data demonstrate that suture closure is a prevailing surgical technique [1-5]. Thus, in Russia, 94% of perforated ulcers undergo suture closure [1]. This is accounted for by numerous subjective and objective reasons and demonstrates a common tendency to guide the treatment to a more personalized approach [6]. Widespread adoption of minimally invasive surgical procedures for perforated ulcer closure in emergency surgical care favors early postoperative period greatly [3, 4, 7-9]. Thus, the Full Member of the Russian Academy of Sciences A.S. Revishvili reports that 31.8% of patients with perforated ulcer in St. Petersburg and 55.4% of patients with perforated ulcer in Moscow undergo video-assisted endoscopic perforated ulcer suture closure [10]. However, long-term outcomes of perforated ulcer surgery by suture closure are not favorable due to high ulcer recurrence rate (6.6% to 62.9%) [7, 8, 11, 12]. Meanwhile, ulcer excision with or without vagotomy is performed in 2-11% of patients only [1] despite 4-times lower ulcer recurrence rate [13]. The removal of morphological substrate (i.e., ulcer incision) during the surgery obviously reduces the risks of bleeding ulcer after suture closure, suture failure in periulcer infiltrate, and pyloroduodenal stenosis [14]. Considering this, the surgical choice for the treatment of perforated duodenal ulcers is still unclear and requires further studies and discussions.

To compare the outcomes of perforated duodenal ulcer surgery by suture closure vs. ulcer excision.

Upper midline laparotomy incision was performed in a total of 69 patients within two hours after the admission. The type of surgical intervention was determined following abdominal revision and the identification of the perforated ulcer of the anterior wall of the duodenal cap.

Operative time, postoperative complications, the length of in-hospital stay, endoscopic signs, and patient satisfaction with surgical outcomes after 1 year were compared between the groups.

Long-term outcomes were evaluated one year after the surgery in an outpatient setting. 41 patients (69.4%) were examined. Among them, 22 were study group patients (66.7%) and 19 were controls (54.3%). Esophagogastroduodenoscopy (EGD) was performed. According to the World Health Organization guidelines, the quality of life (QoL) was also assessed using the Russian version of the Short Form Health Survey (SF-36) [17]. QoL values are presented as mean ± standard deviation (М ± σ).

The study was performed according to the Declaration of Helsinki of the World Medical Association and approved by the local Ethics Committee of the Omsk State Medical University. Statistical analysis was performed using Microsoft Office Excel and Statistica 6.0 software. The parameters were characterized by normal distribution and presented as mean ± standard deviation (М ± σ) using a 95% confidence interval (CI). Parametric Student’s t-test was used to compare the parameters between the groups and to determine if the differences are statistically significant. χ2-test was used as a non-parametric test. The differences were considered significant with p < 0.05.

The groups were matched by demography, disease severity, and the duration of perforation (p > 0.05). Significant differences in the operative time were revealed between the groups (see Table 1), i.e., the mean operative time of perforated ulcer surgery by suture closure was less, on average, by 9.5 min. No significant difference in the length of in-hospital stay was revealed between the groups. 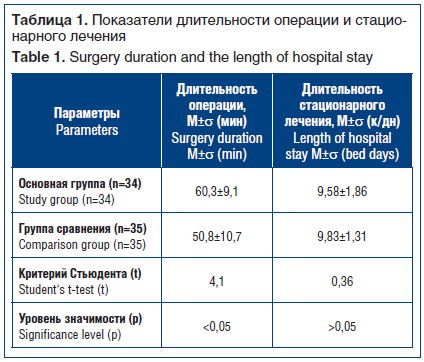 Neither deaths nor complications (pneumonia, suture failure, progressive peritonitis, gastrointestinal bleeding) were reported in the early postoperative period. All patients were discharged in satisfactory condition for continuing treatment and follow-up on an outpatient basis.

After one year, recurrent ulcer was identified in 8 patients (42.1%) of the comparison group as demonstrated by EGD (deformity of the duodenal bulb and scar with central ulcerations). Meanwhile, recurrent ulcer was identified in 1 patient (4.5%) of the study group and a linear scar located in the area of running suture placement with minimal signs of inflammation or duodenal lumen deformity was revealed by EGD in 21 patients (95.5%) (χ2 = 7.790, p = 0.006).

One year after the surgery, 41 patients (59.4% of a total of 69 patients who underwent perforated duodenal ulcer surgery) compiled the Russian version of SF-36 to assess QoL. It was shown that 1-year patient satisfaction with the outcomes of ulcer incision is high as demonstrated by all items of SF-36 (see Table 2).

Our findings are not innovative but confirm previously published data and results of other authors [13, 18]. We failed to reveal any significant differences between the groups in the length of in-hospital stay and the number of early postoperative complications. These findings are similar to the published data [13, 18]. Mean operative time was 60.3 min (CI 57.6; 64.3) in the study group and 50.8 min (CI 47.1; 54.5) in the comparison group. Therefore, significant difference in this parameter (less than 10 min) was revealed between the groups. However, this relative drawback of a more radical surgical procedure in the study group can be minimized as indications expand and the number of surgeries increases.

Clinical analysis of the results of EGD performed 1 year after the surgery has shown that ulcer incision is superior to suture closure of the perforated ulcer as demonstrated by almost 10-times greater rate of ulcer recurrence (42.1% and 4.5%, respectively).

As a result, these differences have an impact on QoL assessment, i.e., significant differences in all parameters were revealed between the groups in favor of a more radical procedure. Our findings are similar to the published data [13, 17]. Perceived treatment satisfaction was higher among patients who experienced duodenal ulcer incision [17].

According to A.N. Vachev (2018), simple suture closure of perforated ulcers is associated with less safety of the sutures placed on the inflamed scarred margins of the perforation thus providing the conditions for the progressive inflammatory changes in the surrounding tissues [18]. Chronic inflammation results in irreversible degenerative (sclerotic) lesions of the intramural vascular bed in the area of the ulceration with more or less local ischemia. This leads to the local decrease of duodenal mucosal barrier function and the progression of the preexisting imbalance between aggressive and protective factors in the duodenal wall [19]. The predominance of aggressive factors (mainly hyperacidity) over protective mechanisms contributes to the recurrent ulcer of the scarred duodenal wall. Ulcer incision and wound closure restore mucosal integrity and provide good prerequisites for muscular layer regeneration. Meanwhile, even partial recovery of muscular layer contractile function can improve venous outflow and accelerate the regression of inflammation. Ulcer incision within the inflamed area and wound closure alter the cascade of the pathological events resulting in disease recurrence due to better tissue regeneration in the affected area. Therefore, the incision of the perforated duodenal ulcer may be considered relatively radical surgical procedure in contrast to its palliative suture closure. Nevertheless, the authors respect the opinion of P.V. Garelik (2014) who recommends avoiding any type of vagotomy in urgent surgeries and instead performing medical vagotomy postoperatively [6].

In September 2020, the 12th Congress of Russian Surgeons will be held in Moscow. One of the sections will focus on the complications of ulcer disease. In particular, the development of the national clinical guidelines on perforated ulcer treatment will be discussed. In the context of the forthcoming congress, the time for a paradigm shift has come in terms of changing management strategy that determines the type of the surgical intervention for the perforated ulcer of the anterior wall of the duodenal cap. The principles of differential patient selection should be obviously followed. However, surgical community should address the issue of expanding indications to the incision of perforated ulcers of the anterior wall of the duodenal cap.

The first two issues can be addressed by video-assisted endoscopic suture closure of the perforated ulcer. The second two issues are disputable [18] and require further studies; rather, we should consider them as relative contraindications.

Intraoperative EGD that allows for the exclusion of “kissing ulcers” and impending bleeding as well as surgical choice based on the size of the ulcer crater and the health of the surrounding mucosa is a promising tool to determine the type of surgical intervention. Surgeons can select the type of surgical intervention based on the results of visual and tactile examination of the affected area (perforation size, the severity of perifocal inflammation, pathologic involvement of adjacent organs, cicatricial mantle etc.) and EGD results (the diameter of the ulcer crater, pylorus involvement, the lack of ulcers of the posterior wall etc.).

Kocher maneuver to mobilize the duodenum, the incision of cicatricial mantle, and Strong's procedure to divide the ligament of Treitz (also known as duodenal de-rotation procedure) are essential intraoperative steps that provide stable good surgical outcomes.

The incision of the perforated ulcer of the anterior wall of the duodenal cap is a more reasonable surgical intervention as compared with its suture closure as demonstrated by 9-fold decrease in ulcer recurrence 1 year after the surgery. In contrast to the current paradigm, we suggest to determine contraindications rather than indications to perforated ulcer incision.

Contact information: Vyacheslav N. Nikitin, e-mail: nikitinwork1966@gmail.com. Financial Disclosure: no authors have a financial or property interest in any material or method mentioned. There is no conflict of interests. Received 20.02.2020.