* Impact factor according to the SCIENCE INDEX 2020

3Institute of Internal and Preventive Medicine, the branch of Federal Publicly Funded
Scientific Institution Federal Research Center of Cytology and Genetics, the Siberian
Branch of the Russian Academy of Sciences, Novosibirsk, Russian Federation

Aim: to identify patterns of development of idiopathic dilated cardiomyopathy (IDC) and ischemic cardiomyopathy (ICM) by studying the rs 1801252 (Ser49Gly) polymorphic variant of the ADRB1 gene.

Patients and Methods: a cohort of 221 patients (mean age — 55.30±9.69 years) was examined. All respondents underwent a standard set of laboratory and instrumental examinations, including coronary angiography. The first group included 111 patients with IDC, 99 of them (89.2%) were men, who were excluded from probable factors of dilated cardiomyopathy. The second group included 110 patients with IDC, including 100 (91.5%) men who had reliable signs of CHD. The control group included 221 people (mean age — 53.6±4.8 years) without signs of cardiovascular diseases. A molecular genetic study of the rs 1801252 (Ser49Gly) polymorphism of the ADRB1 gene was performed in all patients and in the control group.

Conclusion: the data obtained suggest that the carrier of the 145A allele of the ADRB1 gene may serve as an additional risk factor for the development of dilated cardiomyopathy.

Dilated cardiomyopathy (DCM) is a rare heart condition characterized by the dilation of the left ventricle and systolic dysfunction which result in heart failure and sudden cardiac death [1]. Published data demonstrate that the prevalence of DCM is 5-10 per 100,000 [2, 3]. DCM is an inherited disease predominantly referred to as monogenic disorders. The understanding of the molecular pathogenesis of inherited cardiac diseases has significantly improved due to the advances in molecular genetics. Moreover, genetic testing is becoming more available as a component of diagnostic and prognostic tools [4].

Several factors (i.e., viral infections, autoimmune disorders) have been recognized as root causes of DCM. However, many cases are now described as idiopathic DCM [5]. Recent studies demonstrate that inherited DCM occurs in almost 60% of patients. More than 60 genes related to this disease were identified owing to the technological progress in genetic testing. These genes encode a broad spectrum of myocyte proteins (mainly sarcomeric and desmosomal proteins). Meanwhile, pathophysiological mechanisms are yet to be explored [6]. Among these genes, β1-adrenoreceptor gene, ADRB1, is important. This gene is located on chromosome 10 (10q24-q26). The ADRB1 gene (1,434 bp) is lacking introns and encodes a protein consisting of 477 amino acids [3].

It was demonstrated that in patients with heart failure, ADRB1 gene polymorphism (base pair substitution at position 49) is related to survival. The studies on the effect of single nucleotide polymorphism (SNP) on the congestive heart failure were performed. Some studies on codon 49 of ADRB1 gene suggested that Gly49 polymorphic allele is related to DCM while others did not [7, 8]. Another study has demonstrated that the rate of hospital admissions and mortality rate among DCM patients with Gly49 polymorphic allele is involved in myocardial protection in DCM [7]. Finally, a Japanese study did not reveal any associations between gene polymorphism and DCM [10].

Considering that ADRB1 is the major regulator of heart rhythm, it can be assumed that specific ADRB1 SNPs will provide a clinically relevant effect on heart rate (HR). In Japanese and Chinese populations, heterozygous Ser49Gly polymorphism affects resting HR irrespective of other factors. Patients with homozygous (Gly49) genotype experience HR reduction by 5 bpm compared to patients with homozygous (Ser49) genotype [12].

Hence, there are reasons to expect that knowing ADRB1 gene polymorphism pattern in early diagnosed various cardiomyopathies will have an impact on the risk of sudden cardiac death.

To recognize the patterns of the development of idiopathic DCM and ischemic cardiomyopathy (ICM) by examining rs1801252 (Ser49Gly) ADRB1 gene polymorphism.

A prospective study included the residents of the Krasnoyarsk Region (both men and women) older than 18 years. The study was approved by the local ethics committee of the Prof. V.F. Voino-Yasenetsky Krasnoyarsk State Medical University. All patients have given the informed consent to participate in the study.

All study participants underwent standard laboratory and instrumental tests including coronary angiography. In suspected myocarditis, cardiac magnetic resonance imaging was performed. Patients without a clear cause of the enlargement of heart chambers were included in group 1. Patients with the signs of coronary heart disease were included in group 2.

Statistical analysis was performed using Statistica v. 7.0 software. The significance of intergroup differences and the conformity of genotype frequencies with the Hardy-Weinberg principle were evaluated using chi-square test (χ2). The strength of the associations of the genotypic characteristics of the genes investigated and the risk of unfavorable outcome was calculated by odds ratio (OR) and its 95% confidence interval (CI). OR = 1 stands for the lack of associations while OR > 1 stands for a positive association between the allele/genotype and the disease and OR < 1 stands for a negative association between the allele/genotype and the disease.

No significant differences in rs1801252 (Ser49Gly) polymorphic alleles of ADRB1 gene were identified between DCM patients and the controls. Meanwhile, when comparing the prevalence of rs1801252 (Ser49Gly) alleles of ADRВ1 gene, 145А allele was shown to be significantly more common in DCM male patients compared to male controls (83.8% vs. 59.3%, respectively, р = 0.0001). 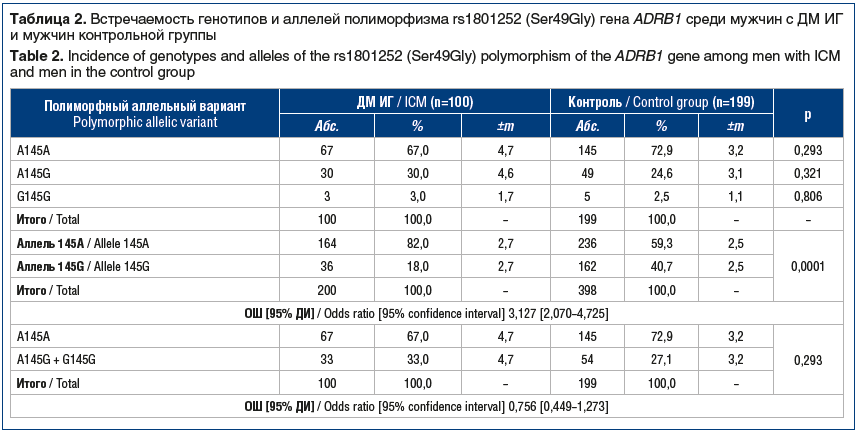 No significant differences in the prevalence of rs1801252 (Ser49Gly) alleles of ADRВ1 gene between DCM or ICM female patients and the controls were reported.

Our study on rs1801252 (Ser49Gly) ADRB1 gene polymorphism has revealed no significant differences in genotype prevalence between study group (DCM or ICM) and the controls. However, we have demonstrated the differences in the prevalence of rs1801252 (Ser49Gly) polymorphic allele of ADRВ1 gene between study group and the controls, i.e., 145А allele was much more common in male patients with DCM and ICM than in healthy men. Considering that these data were derived from the analysis of allele prevalence in male patients with DCM and ICM, we suggest that carrying 145А allele of ADRB1 gene is an additional risk factor for dilated cardiomyopathy. Further studies with large sample sizes are needed to confirm our findings.

A biological reason for using an over-dominant model implies that at least one variant allele (i.e., А145 allele) is enough for modifying the risk of the development of different cardiomyopathies. We failed to find any published data demonstrating the association between ADRB1 gene polymorphism and ICM or DCM.

The existence of genetic characteristics of various populations accounts for the importance of studying them. Molecular genetic testing for the predictors of the genetic predisposition to cardiomyopathies is a promising area of researches. Cardiologists should learn to integrate these novel knowledge into diagnostic protocols to improve the management of the families with inherited cardiomyopathies, in particular, to discuss with patients and their relatives the genetic aspects of these disorders (including their inheritance). This requires the basic understanding of the principles of genetic counseling which helps overcome the psychological, social, professional, ethic, and legal consequences of a genetic disorder.

Our findings on the molecular genetic pattern of different cardiomyopathies will contribute to the global databases on genome-wide association studies and the studies on the pathophysiological mechanisms of dilated cardiomyopathy.

Contact information: Oksana O. Kuznetsova, e-mail: Isachenko102@inbox.ru. Financial Disclosure: no authors have a financial or property interest in any material or method mentioned. There is no conflict of interests. Received 14.07.2020, revised 28.07.2020, accepted 11.08.2020.

Association between the severity of coro...
0
548
All articles