* Impact factor according to the SCIENCE INDEX 2017

Aim: to study the possibilities of online surveys for mothers using a questionnaire on the basis of the Rome IV criteria (2016) as a screening for functional gastrointestinal disorders (FGID) in infants and toddlers.

Patients and Methods: an anonymous online survey of 477 mothers was conducted regarding the health condition of their children under the age of 4 years. The survey consisted of 2 question pools. The first pool included general questions regarding the age of the mother at the time of delivery, obstetric and gynecological history, feeding of an infant/toddler at the time of the survey. The second pool included questions regarding FGID in infants and toddlers on three separate topics: functional disorders of the first year of life; diagnosis of cyclic vomiting syndrome; bowel movement disorder.

In early children, functional gastrointestinal disorders (FGIDs) are still a common reason for the referral to a pediatrician [1, 2].

Parent survey or the analysis of the medical records of a certain child are considered objective tools to obtain the information on FGIDs in children. One of the early survey studies on FGIDs in children under 6 months old which was performed in Italy in 2005 enrolled 2,879 parents. It was demonstrated that FGIDs are diagnosed in 54.9% of children under 6 months old, i.e., regurgitation in 23.1%, colic in 20.5%, constipation in 17.6%, vomiting in 6%, and diarrhea in 4.1% [3]. In 2015, online survey using an approved questionnaire based on the Rome III diagnostic criteria was performed. 320 mothers of children aged 0-3 years were enrolled. FGIDs were revealed in 27% of early children. The most common disorder in children under 1 year was regurgitation while the most common disorder in early children was functional constipation. Children with FGIDs had poorer quality of life, their parents consulted a pediatrician more often, and the children were admitted to a hospital more often as well [2].

Since 2016, a questionnaire for parents based on the Rome IV diagnostic criteria (Rome IV Diagnostic Questionnaire for Pediatrics FGIDs for ages 0-3/R4PDQ-Toddler Parent-report form) was recommended to improve the diagnosis of FGIDs in children. However, this questionnaire is not approved in Russia, and we failed to find a Russian translation.


To assess the potentialities of online surveying of mothers using a questionnaire based on R4PDQ-Toddler Parent-report form (2016) as a screening tool for FGIDs in early children.

477 mothers participated in this online survey. The survey was performed using Google Forms platform from May 16 to May 26, 2020. The mothers were asked to participate in an anonymous survey on the health of the children of the first 4 years. To prevent a systematic bias, they were not informed of the aim of the study. To prevent incomplete reporting, the mothers can proceed to next question only upon answering the previous one. Moreover, the data from the mothers who were inconsistent in their answers were excluded from the study and data analysis.

The questionnaire included “open” and “closed” questions as well as the Likert scale questions in a form of text answers combined in two blocks. The first block included general questions (i.e., mother’s age by the time of childbirth, obstetrical gynecological anamnesis, the number of children in the family, children’s gender, feeding by the time of the survey). The second block was composed on the basis of the Rome IV diagnostic criteria [4] and included the questions on FGIDs in infants and toddlers divided into 3 separate topics, i.e., functional disorders of the first year (regurgitation, infantile colic, dyschezia), the diagnosis of cyclic vomiting syndrome, and defecation disorders (constipation, encopresis).

The data were represented as tables (absolute numbers and percentages).

Wanted babies were born from 411 intentional and planned pregnancies (86%). The rest of the children were unwanted for various reasons, i.e., due to unintended pregnancy (n = 60, 12.5%) or unwanted pregnancy (n = 6, 1.5%) that was not terminated for medical reasons or a woman was forced to preserve her pregnancy.

The consciousness with respect to the childbirth has an impact on feeding (see Table 1). 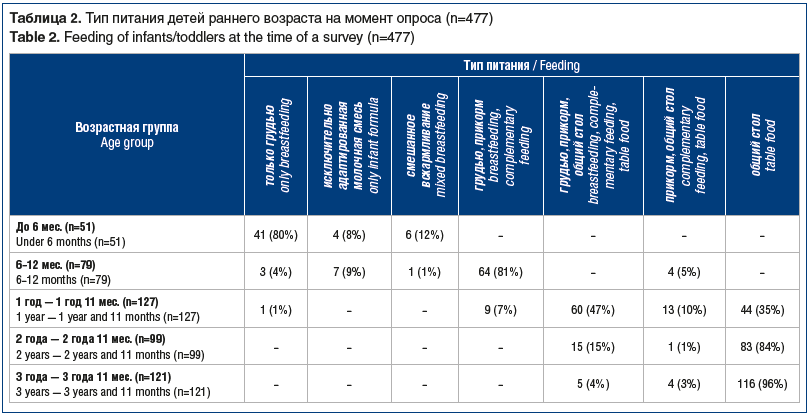 Noteworthy, almost all mothers who participated in the survey sticked to the rules of the feeding in the first year. Their babies were timely given supplementary good and started on a general diet in their older years.

The harmonic physical development of a child at any age and adequate weight gain are indicative of his/her health both for a pediatrician and the mother. Almost all mothers closely followed physical development of her child within the first year. Later on, the attention gradually declined. By the 3rd year of a child’s life, a quarter of the mothers couldn’t answer on a relevant question of the questionnaire (see Table 3). 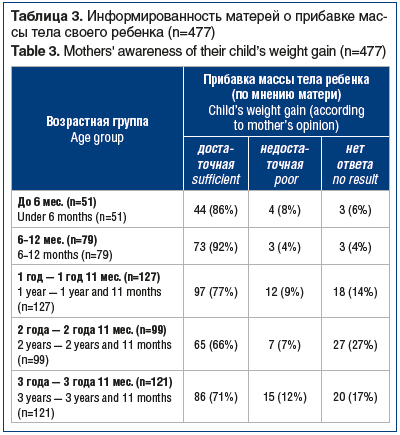 The questions on regurgitation were responded by the mothers of the children under 12 months only (see Table 4).

During the first year, a half of children suffered from colic that lasted less than 3 hours daily once or twice weekly.

A block on the diagnosis of the functional constipation in early children included the questions on defecation disorders over the past month, i.e., defecation frequency, stool consistency throughout a week, and whether a child pushed hard during defecation (see Tables 6 and 7). 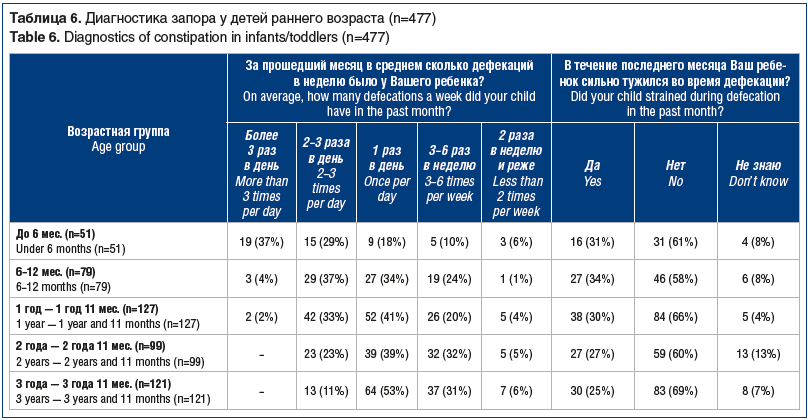 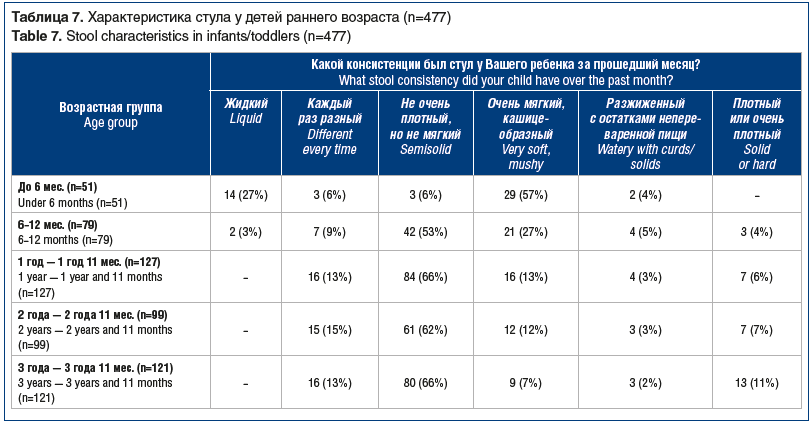 About two-third of early children had a regular daily stool and experienced no difficulties in defecation.

Two-third of early children had healthy soft stool. The rate of mushy or unstable stool was similar in children over 1 year.

Early child socialization and obtaining hygienic skills are required for the maturation and physiological development of the central nervous system (CNS), the training of gastrointestinal sphincters, the muscles of the anterior abdominal wall, and pelvic muscles that belong to the skeletal muscles regulated by CNS (see Table 8). 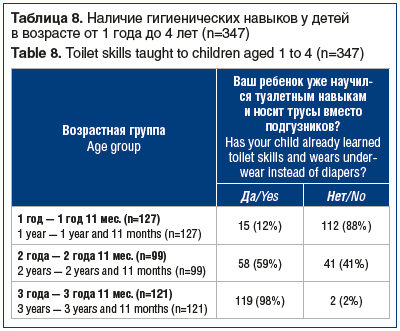 The children were trained the toilet lately (after the age of 2 years). Nonetheless, most children did not use diapers by the age of 4 years.

According to the Rome IV diagnostic criteria, the diagnosis of functional constipation requires at least two symptoms out of the following within the past month: (1) two or less defecations in a week; (2) hard lumps or pain during defecation; (3) defecation deterring at least once a week; (4) large fecal matter in the bowel under palpation; (5) large diameter stool. Two additional criteria were introduced for toilet-trained children: (1) fecal incontinence with any feces amount upon the undergarments and (2) large volume stool that impeded flushing down the toilet.

68 early children (14.3%) were diagnosed with functional constipation based on the analysis of the answers (see Table 9).

During the first year, the prevalence of functional constipation was 5.8% in children under 6 months and 7.6% in children aged 6-12 months and gradually increased to 21.5% by the age of 3-4 years. These findings are in line with the studies over the last decade [6].

The questionnaire included two questions with “I don’t know” as an answer option. These items allowed for assessing mother’s knowledge on her child’s health. In total, 96 out of 477 mothers (20.1%) responded as “I don’t know”. Of them, 11 mothers lacked the knowledge of both weight gain and whether their children pushed hard during defecation (see Table 10). 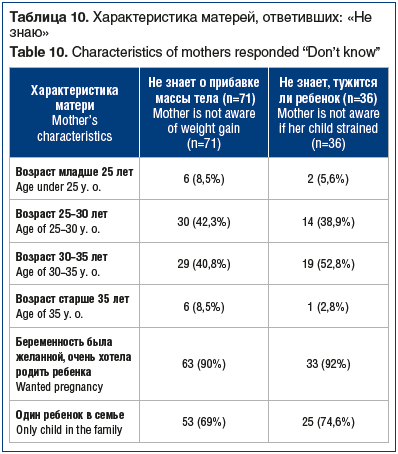 Most mothers who showed little interest in the physical development and defecation of their children were adult women aged 25-35 years raised one wanted baby. This phenomenon needs further studies involving psychologists. Remarkably, 5 out of 36 children (13.9%) of mothers who lacked the knowledge whether their children pushed hard during defecation were diagnosed with constipation (according to the Rome IV diagnostic criteria).

Over the last 6 months, rumination syndrome was diagnosed in 2 children. Repeated episodes of vomiting lasted more than 2 hours occurred in 28 children (5.9%); in 3 children, three and more episodes were observed.

The results of our online survey revealed a common trend in the development of FGIDs in early children. Most mothers were adult women raised one wanted child who breastfeeded till 12 months and timely gave supplementary good. As a result, the prevalence of FGIDs illustrates the anatomical physiological features of a baby and progressively reduces as a child grows up. Meanwhile, the diagnosis of functional constipation which can develop both in younger and older children is challenging. Our findings are generally in line with the results of both meta analyses and recent individual studies.

According to H.J. Jang et al. [8], only 16.6% of pediatricians have a clear understanding of the Rome IV diagnostic criteria. As a result, different treatment approaches were applied. Unlike pediatric gastroenterologists, general pediatricians prescribed the preparations of lactulose and probiotics more often (treatment duration less than 3 months) and recommended to change an infant formula in children under 1 year [8]. The results of the online survey of 362 Australian pharmacists have demonstrated that 76% of pharmacists weekly consult the parents on the treatment for regurgitation and colic and 85% of pharmacists consult on the treatment for constipation. Moreover, pharmacotherapy and the correction of nutrition in constipations were recommended equally (70% and 67%, respectively) [9]. Pediatric gastroenterologists recommended polyethylene glycol and high-dose lactulose in the beginning of the treatment and the gradual reduction in the dose (treatment duration 6 months) [8].

A multicenter study performed in 2017 involving 278 doctors from 9 countries (Croatia, Greece, Israel, Italy, Lebanon, Montenegro, Serbia, Slovenia, and Spain) demonstrated the lack of the common diagnostic and therapeutic approach to FGIDs among the specialists of different nationalities. Survey analysis has demonstrated that just every fourth doctor applies the Rome III criteria to diagnose FGIDs. Meanwhile, most doctors (93.5-97.5%) diagnosed FGIDs based on their personal experience and prescribed diet correction and osmotic laxatives for functional constipation [10].

In children over 2.5 years with functional constipation who trained the toilet, behavioral therapy is of crucial importance, i.e., putting a child on the potty at regular intervals, encouraging after successful defecation to develop a persistent defecation reflex.

The results of online survey are in line with the current statistical data on the prevalence of FGIDs [4]. Therefore, parent survey can be considered the initial diagnostic step in children with FGIDs. These results generally reflect the anatomical and physiological hallmarks of the maturation of a child’s gastrointestinal system.

Meanwhile, the survey identified some issues, i.e., poor maternal knowledge of the health of their children, late (at the age of 3 years) toilet training, and the rise of constipation rate by the age of 4 years. The delay in toilet training (in the presence of diapers) and mothers’ reluctance to actively train the toilet are the current challenges of a civilized society.

Editorial Board is grateful to JSC «PROGRESS» for the assistance in technical edition of this publication.

Contact information: Maria I. Dubrovskaya, e-mail: marigdubr@gmail.com. Financial Disclosure: no authors have a financial or property interest in any material or method mentioned. There is no conflict of interests. Received 21.07.2020, revised 04.08.2020, accepted 18.08.2020.

Evaluation of the efficacy of using a mi...
0
591
All articles